This is what we had for breakfast this morning! It's VERY yummy. I didn't think that I would like it but I love oatmeal and now I love this. It's super simple to make but takes roughly 35 minutes to cook. If you want to eat it on a school day or work day you'd have to put it on right when you get up. Because we both work from home most of the time we can make it more often.

I also have a recipe for steel cut oatmeal I believe in a crockpot...I will post that recipe if it is. 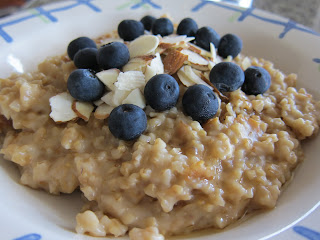 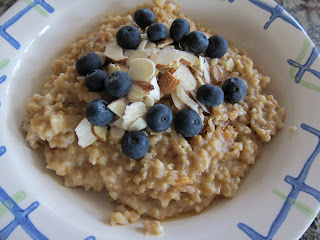 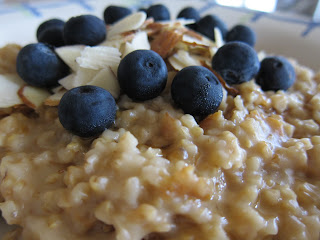 Directions
Put milk in a pan, stir in the oats and honey, and heat on high. Once the mixture begins getting thick, turn down the heat and simmer about 35 minutes.


This makes a very small amount so if you want more double it. For Chad and I, I triple it so we have 3 servings. It seems like it takes longer to cook when you double or triple the recipe. I would just watch it though so it doesn't burn and I would stir it every so often.

I also add sliced almonds and blueberries and drizzle some honey on top. You could add whatever you'd like though.

The Plain Unsweetened Almond Milk is the boxed liquid stuff that you don't have to keep in the fridge before you use it...so I can stock up and keep in the pantry.
Posted by Beth at 9:09 PM 2 comments:

Email ThisBlogThis!Share to TwitterShare to FacebookShare to Pinterest
Labels: Oatmeal

I made this smoothie this morning...no recipe just using what we had and it turned out great. So here's my recipe...I'm going to call it Green Pineapple. 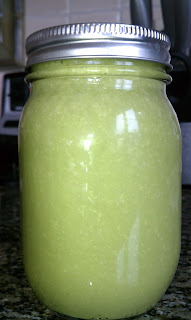 7 Ice Cubes (you can add more if you like)

Put everything in the blender and mix. Makes 2 Glasses Full

This smoothie kind of tastes like a pina-colada. You don't really taste the spinich.


***I usually make more if it's a smoothie Chad likes and then I put the remainder in a jar and put into the fridge for later. With this one I put the second glass into a jar for later.***
Posted by Beth at 10:51 AM No comments:

Email ThisBlogThis!Share to TwitterShare to FacebookShare to Pinterest
Labels: Smoothie

I got this recipe from my mom but I think it came from my cousin Tina or her friend Michelle...not sure. It is however, sooooooooo yummy!!! My mom said it was a Paula Dean recipe so I hope that's correct haha! 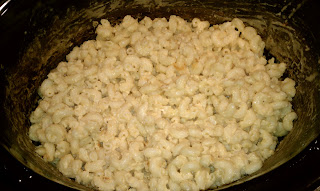 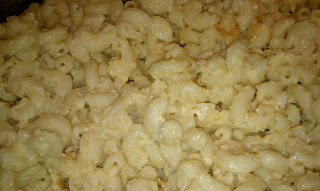 Pre-cook noodles for about 7 minutes - You don't want them to be all the way done.

In the crockpot mix everything BUT the noodles. Once noodles are done drain and mix into the crockpot.

Cook for roughly 3 hours on high then 2 hours on low. My crockpot is on steriods I think and high burns it....low is like high and high is like turbo high lol. I can't ever cook it for the 3 hours. So just watch it so it doesn't burn.


I have recently changed up this recipe. One change was by choice and the other was due to me trying to make it without actually looking at the recipe.


Change #1: I have started to add a little less Cheddar and started adding Gruyere Cheese. It gives it a much better taste.


Change #2: I no longer add eggs as they give it a curdle like texture without them it's very creamy. I discovered this by accident when trying to make the recipe from memory and forgot the eggs.
Posted by Beth at 7:21 PM 1 comment: 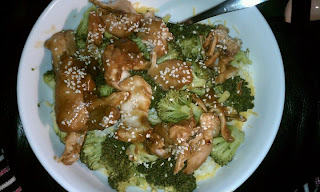 I made this last 4th of July for our family swim party. Reminded me of the creamed corn we had in Texas at the BBQ places.

I got this recipe here: Allrecipes (This website is awesome if you need to make food for get togethers because you can change the serving size to whatever you need and it'll change the ingredients to make that amount. I changed it to 35 for the 4th of July and it came out perfect with leftovers!)

1.In a slow cooker, combine corn, cream cheese, butter, milk, and sugar. Season with salt and pepper to taste.

So I tried to make these ALL organic but I learned that you can't use organic peanut butter in these due to the oil it makes them soft and not melt in your mouth like.

Directions
In a heavy saucepan bring to a boil, the sugar, cocoa, butter and milk. Let boil for 1 minute then add peanut butter, vanilla and oatmeal. On a sheet of waxed paper, drop mixture by the teaspoonfuls and let sit until cooled and hardened.
Posted by Beth at 7:17 PM No comments:

I made this at Christmas time and brought it to the Bartlett family get together along with having it as a munchie at our house before dinner. It's very yummy! 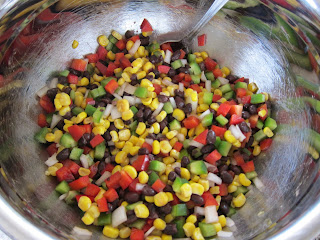 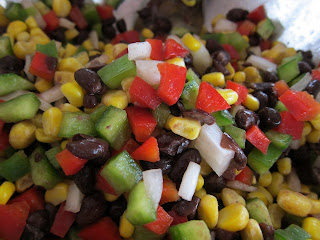 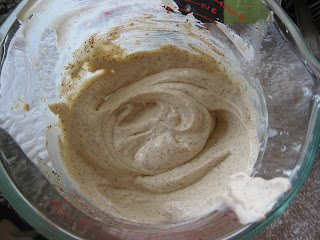 Directions
In a large bowl, combine the beans, corn, peppers, onion, and parsley.